About the Music Festival:

The Fox Valley Music Festival was the creation of a group of devoted music directors who wanted their young people to have the experience of singing and playing with others of their own age as a reward for hard work in their home schools, as challenge, and as inspiration gained by sharing their music.

On May 4, 1928, directors and students from 10 Fox Valley area high schools met at St. Charles High School for their first Festival. At afternoon and evening programs, each school contributed its own band, orchestra or choral group and shared in a combined choral group, a combined orchestra, and an all-school band conducted by Fox Valley school directors.

Very soon, the idea of having a huge chorus with selected singers from all schools came into being, with a large selected band and orchestra sharing the Festival. Guest conductors of outstanding musicianship were invited and men like the venerable George Dasch, the famed Olaf C. Christiansen, Tauno Hannikainen of the Chicago Symphony, University of Michigan's William D. Revelli, Raymond Dvorak of the University of Illinois and many others responded with their talents.

As we approach the 86th anniversary, many consider the Fox Valley Music Festival to be one of the oldest continuing music festivals in the United States. 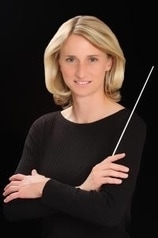 ​Alicia Neal joined the EIU faculty as Director of Bands in the Fall of 2012. Her teaching responsibilities include Wind Symphony, Concert Band, Conducting Classes, and overseeing the band area. Originally from Kingwood, Texas, Dr. Neal earned a Bachelor’s degree in Music Education from the University of Colorado, where she graduated with honors. She completed her graduate conducting degree with Allan McMurray at the University of Colorado. Dr. Neal attended Northwestern University for her doctoral degree, where she studied with Mallory Thompson and graduated in 2007 with Conducting Program Honors.

Dr. Neal’s dissertation, titled Traveling of the Mind: An Interview with Michael Colgrass and an Analysis of “Raag Mala,” focuses on the music and compositional process of the Pulitzer Prize winning American composer. Other research interests include increasing post-secondary participation in band ensembles for non-music majors and enhancing undergraduate music education major training through the collegiate band curriculum. Dr. Neal is a nationally sought-after clinician and guest conductor, and, in 2008, was a co-presenter at the Midwest Band and Orchestra Clinic for a session titled, “Four Centuries of Masterworks for Brass.” Her professional affiliations include College Band Director’s National Association, College of Music Society, National Association for Music Education, Illinois Music Educator’s Association.
​
Prior to her appointment at Eastern Illinois University, Dr. Neal served as the Assistant Director of Bands and Associate Director of Athletic Bands at the University of Minnesota, where she assisted with Marching Band, directed Pep Band, conducted University Band, and taught Basic Conducting Classes. Dr. Neal also spent one year at St. Xavier University in Chicago as the Interim Director of Instrumental Ensembles, and three years teaching high school and middle school band in the Humble Independent School District in Houston, Texas.