About the Director: Emily Ferguson is an enthusiastic choral music educator who is elated to join the RAMily at Grayslake Central!  Emily earned her B.A. in Music Education with a choral emphasis from Augustana College (IL).  By the Mighty Mississippi, Emily proudly served as a section leader in the Augustana Choir, which toured in the United States, Germany, and Austria, including performances at Carnegie Hall.  Prior to GCHS, Emily has taught general music and secondary choirs across Northern Illinois for nine years.  This past summer, Emily also completed her Master of Music Education degree at the University of Illinois.
​
Outside of teaching, Emily enjoys playing piano, reading, hiking, cooking (even when it ends disastrously and we end up at Wendy's), being outside, traveling, and cheering on the St. Louis Cardinals.  She and her husband live in Lake Villa with their cat, Mirabelle.  ​ 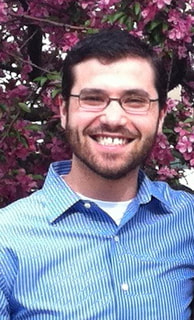 About the Director: Zachary Geller has been the Director of Bands at Grayslake Central High School in Grayslake, Illinois (School District D127) since 2021.  At GCHS, Mr. Geller is the director of the MARCHING Rams, teaches all three levels of concert bands (Concert Band, Symphonic Band, and Wind Ensemble), Guitar 1 and 2, and AP Music Theory.  Mr. Geller also directs the pep band during basketball season, the annual pit orchestra for our school musical, and teaches all extra curricular Jazz Bands.  Prior to teaching at GCHS, Mr. Geller was the Director of Bands at Streamwood High School (School District U-46) for 8 years.  At SHS, Mr. Geller taught the SABRE Marching Band, concert band, pep band, jazz band, music theory, and is the director of the pit orchestra for the annual school musical.  Mr. Geller is proud to have been a member of the music staff at School District U-46, who helped the district be recognized as one of the Best Communities for Music Education by the NAMM Foundation in 2019.

Mr. Geller received his Bachelor of Music Education degree from the University of Illinois at Urbana-Champaign in 2010, and his Master of Music Education degree in 2018 from U of I as well. As an undergrad at the University of Illinois, Mr. Geller was a member of the Marching Illini for four years, during which he arranged the music of Ben Folds, which was performed by the Marching Illini in 2009. He was also assistant director, and later, director of the Orange and Blues Band.  While at the University of Illinois, Mr. Geller studied trumpet privately with Professors Ronald Romm, Tito Carrillo, and the late Dr. Michael Ewald, conducting with Dr. Joseph Manfredo and Dr. Louis Bergonzi, and music technology with Professor Scott Wyatt.

Mr. Geller is an active adjudicator and speaker having presented multiple professional development sessions for School District U-46, and was a guest speaker on the 2017 music educators panel for pre-service teachers at the Lake Forest College of Music.  Mr. Geller spends his free time writing and arranging music, and works as a clinician over the summer teaching performance techniques to various high school marching bands.  Mr. Geller has written music for The Marching Illini, The University of Illinois Basketball Band, Lakes Community High School (IL), and many other school bands throughout Illinois.